BOSS GT-100 Guitar Effects Pedal: How to Make the Connections to an Amplifier

The BOSS GT-100 Guitar Effects Pedal is the newest model amongst their floor guitar pedal board products, a compact, rugged and powerful unit that can provide an impressive amount of possibilities to shape the sound of your guitar.

This kind of high technology jewels have become popular between guitarists, but you must be aware that how you make the connections is crucial in order to obtain the best from their possibilities, and the correct choice depends on the usage that you want to do of them.

This article treats the connection of BOSS GT-100 multi effect pedal to an amplifier, and refers to the Version 2.0 update.

Inside the article there are some references to the GT-100 Owner’s manual that can be freely downloaded here.

The BOSS GT-100 Guitar Effects Pedal is the actual flagship of their floor guitar pedal board products.

It’s a powerful device, in my opinion incredibly powerful compared to its price, that relies on the latest BOSS COSM (Composite Object Sound Modeling) technology. Just to give you an idea, these are some facts and figures extracted from its Owner’s manual:

just to mention a few. Not bad, uh? Yes, but all these power brings complexity, and despite BOSS has made an excellent job in organizing the Human Machine Interface, simplifying it compared to the previous model BOSS GT-10 thanks to the “two screen user interface“, the BOSS GT-100 is not easy to understand and manage. As a prove of this, if you are intentioned to purchase a GT-100, take a look to some music instruments equipments selling announcements in your zone/country: I am quite sure that you will find someone that has played a little bit with a new BOSS GT-100, has been discouraged by its complexity and now is selling it at a lower price affirming that “it’s not for me“. 🙂

(*) available with Ver. 2 on board firmware

BOSS GT-100 connection to an amplifier

The Owner’s manual at pages 22 and 23 describes all the possible connections as shown in figure 1: 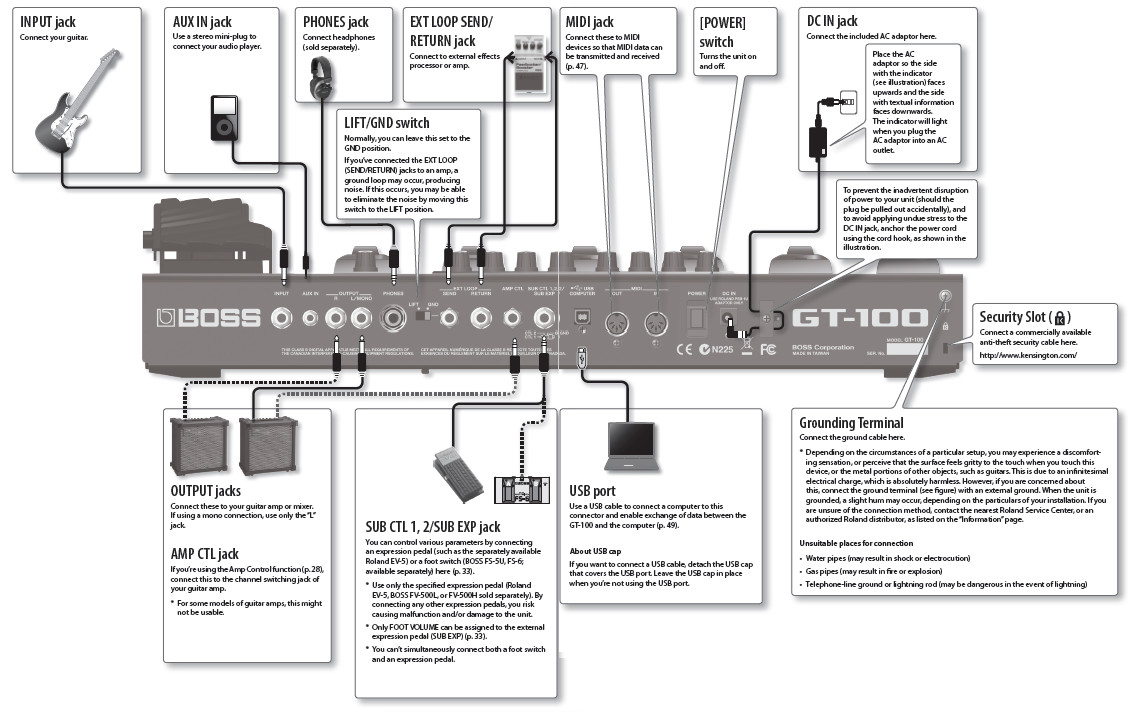 To connect a BOSS GT-100 to an amplifier you must first make a basilar decision that impacts significantly on the set-up choosing between two possibilities:

Please note that patches created for one set-up will not sound good with the other one, so once again this decision is very important because it will condition even your patches creation that usually is a time consuming task.

BOSS GT-100 as effects unit only

In this hypothesis the basic set-up could be the classical one shown in figure 2: 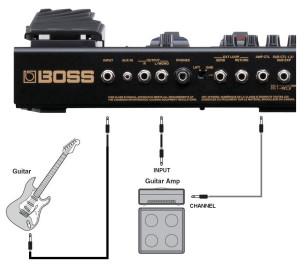 the signal generated by your guitar is processed by the unit just like if you had a classic pedal board, but with plenty of versatility more because into any single patch you can decide the order of the effects and their settings. In practice, selecting a patch is just like if you completely changed the pedal board that you are using !! 🙂 Through the AMP CTL jack you can even switch the channels of your amplifier, and the state of this output is programmable into the patches.

Note that with this configuration the only amplifier characteristic sound(s) available will be the one(s) of your amplifier. If you are using a Marshall, it will never sound like a Fender, Vox, and vice versa.

There are possible variations to this set-up. For example you can use the connections shown in figure 3 if you want to play stereo using 2 amplifiers: 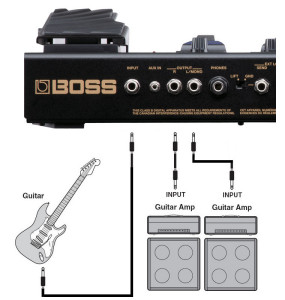 Or the connections shown in figure 4 if you want to use external additional effects: 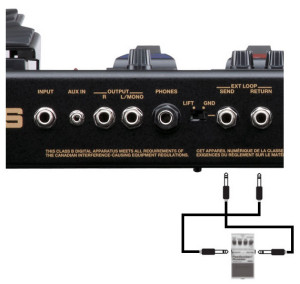 in this case note that the insertion or not of the external effects into the patch effects chain(s) is programmable into the patches.

Finally, please note that it’s extremely important that you take care of the OUTPUT SELECT settings, see page 24 of the Owner’s Manual at chapter “Specifying the Output Device (Output Select)“. It’s stated that “You’ll need to specify the type of device (amp) that’s connected to the OUTPUT jacks. The GT-100 will apply an internal adjustment so that the output will sound optimal on the system you are using.”

How to do this is explained at page 9 of the Owner’s Manual, and the possible settings for the set-up above could be:

The preamplifiers simulations provided by the COSM technology are one of the powerful characteristics of BOSS GT-100 Guitar Effects Pedal. The wide set of diversified clean, overdriven and distorted tones that it can produce depends on them, and you cannot appreciate them with the schemes illustrated in figures 2 and 3. The reason is simple: if you use a preamp simulation into your GT-100 it shapes your guitar’s sound with its tonal characteristics and controls (gain, treble, middle, presence and so on), but your external amplifier will do the same a second time with its preamp section, and the resulting effect is not good. The last preamplifier tends to prevail, and you don’t hear a clear difference changing basic aspects of a tone.

In order to appreciate the preamplifiers simulations the basic set-up is the one shown in figure 5: 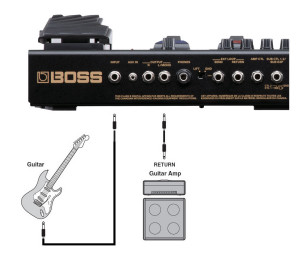 in this way you connect the output of your  GT-100 to the return input of your amplifier: this means that you send the sound directly to the power amplification section of the amp, that doesn’t change significantly the tonal characteristics of the sound, it just amplifies it as it is. Only the BOSS GT-100 acts as the preamp, and in this way you can appreciate the powerful simulations of the COSM technology. Make a simple test: switch on only the preamp unit of your GT-100 and select as a type “Clean TWIN“, that is a simulation of a Fender Twin Reverb amplifier, or “BG Lead“, that simulates the lead sound of a Mesa Boogie combo amplifier, and listen by yourself.

A possible variation to this set-up is the one shown in figure 6: 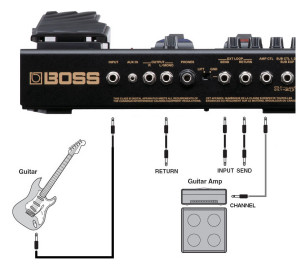 It adds the possibility to use the preamplifier stage of your amplifier into the patch effects chain(s). The insertion or not and the eventual switch of its channels are programmable into the patches.

Please note that it’s extremely important that you take care of the OUTPUT SELECT settings, see page 24 of the Owner’s Manual at chapter “Specifying the Output Device (Output Select)“. It’s stated that “You’ll need to specify the type of device (amp) that’s connected to the OUTPUT jacks. The GT-100 will apply an internal adjustment so that the output will sound optimal on the system you are using.”

How to do this is explained at page 9 of the Owner’s Manual, and the possible settings for the set-up above could be:

There are some other considerations about fully appreciate the GT-100 preamplifiers simulations: this set-up does not permit you to completely appreciate them. The reason is that the loudspeakers and cabinet of your amplifier that reproduce the sound have an influence too on its tonal characteristics.

For this reason the way to fully appreciate the GT-100 preamplifiers simulations is to connect it directly to a SRS (Sound Reinforcement System) / PA (Public Address) system, stage monitor or keyboard amplifier, possibility treated in this post.

Moreover, note that as written at page 9 of the Owner’s Manual in the “memo” box “the SP type parameter of the preamplifier unit of GT-100 is valid (read produces an effect) only if the Output Select setting is set to LINE/PHONES “, value used for direct connections to SRS/PA systems, monitors or keyboard amplifiers. The SP parameter has an interesting effect because let you simulate the characteristics of different speakers (number of cones, their diameter, and so on). This means that with the set-up above you do not have this possibility available.

BOSS GT-100 Guitar Effects Pedal: How to Make the Connections to a Sound Reinforcement System

BOSS®, COSM™, Fender, Marshall and Mesa Boogie are trademarks of their respective owners.

1 Comment » to “BOSS GT-100 Guitar Effects Pedal: How to Make the Connections to an Amplifier”