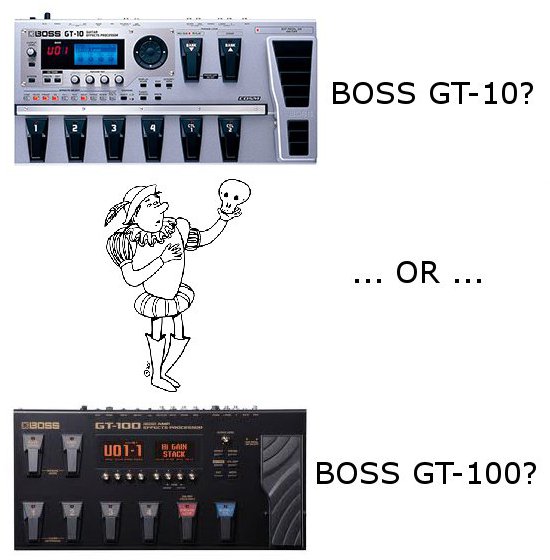 I want to share with you this “dilemma”, and ask you to offer your contribution to solve it.  🙂

I am actually a satisfied user of a BOSS GT-10 guitar effects pedal, but since the new model BOSS GT-100 has been around for a couple of years, I am asking myself if I should adopt it as an improvement of my gear. So, since we are living in the IT era, I started to gather information in Internet reading forums and listening to various demos and videos.

After this, I am still not able to make a decision about keeping my GT-10 or substitute it with a new GT-100.

So I will gather into this post all the questions, pros and cons that I have collected at the date of writing, and will keep it updated with the new information that I will find, closing it hopefully with my final decision 🙂 .

Any comment about your experiences on this matter will be welcome.

The GT-100 also offers two extra distortion effects (FX1 and FX2) so you can use 3 at the same time, the GT-100 distortions are fewer but of better quality.

the GT-100 offers less preamp types, but they are of better quality.

I want to confirm that the GT100 preamps are greatly different from the GT8, and slightly improved from the GT-10. There were discernible differences, mostly in how the gain (or dirt) reacted to playing strength. I was very impressed with how organic the GT100 sounded. It was very marginal compared to the GT10, but noticeable when having them side by side.
I too missed the selection of amps in the GT10, but really there were only three amp types (or styles) that I used…R+B vintage boosted clean, edge of break-up bluesy sound (SRV), and Marshall Grunt (AC/DC, Rush, classic Marshall sound). These styles, along with pretty much anything else, can be found or tweaked easily with the selection on the GT100.

PRO: I have tens of good tones made for my guitars and playing styles

PRO: It has the delay and reverb spillover feature on patch change

PRO: Its programming interface is simpler than the GT-10 one, less changes of pages are necessary in order to reach the parameters

The GT100 interface was a dream to use…so much that is spoiled me.

I will say I found GT100 more difficult to use compared to GT10 as most say it’s easier. I believe it’s because I’m so use to how the Gt-10 works and the Gt-100 is very different.  I’m sure with enough time spent , the 2 windows would become much more useful.

CON: Even if somebody into some forums states that the sound of the modeled preamplifiers is better compared to the GT-10 ones, the tonal possibilities seem to be basically the same. The GT-100 seems to be just a restyle of the GT-10 motivated only by the necessity of satisfy the market with a new device. This wouldn’t justify the effort of learning how to use a new device and recreate the tones in case that there wasn’t the possibility to migrate them between the two devices

CON: It has not the delay and reverb spillover feature on patch change

BOSS GT-10 Guitar Effects Pedal: How to Make the Connections to Obtain the Best