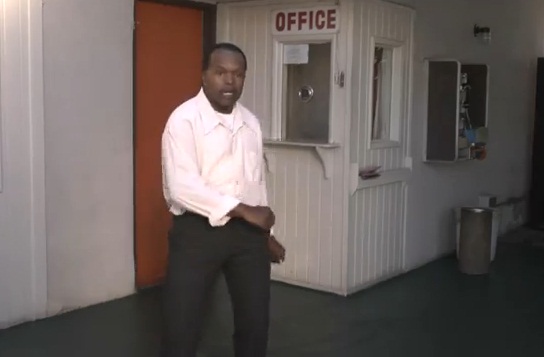 Does the name Derrick Tuggle recall you somebody famous?  Probably not, but there are chances that you have seen him in a couple of famous music videos recently: Lonely Boy by the rock band The Black Keys and Stand by Lenny Kravitz.

Derrick T. Tuggle is a 48-year-old actor and musician that makes ordinary jobs to maintain himself while is attending acting classes and participating in casts occasionally.

Apart from these two videos, he’s had music-video experience in the past doing background work in clips for the Dave Matthews Band and Lloyd.

Take a look to his incredible story ! 🙂

Derrick is the sole starring of the music video for the song Lonely Boy by The Black Keys. The video is absolutely minimal, featuring Derrick that dances and lip-syncs to the song in front of a typical American motel, but went viral and had more than 400,000 views on YouTube within 24 hours.

The story of this video is incredible: the video originally had a script and a cast of several people, but the group after various edits were still not satisfied from the results. Then they said “what about that one guy, the extra who had that one dance scene?” Tuggle was originally cast as an extra and while on set improvised dancing catching the attention of the director, that asked him “Can you perform?” that replied “I can dance, anybody can dance“. And then he took some of the best moves around: John Travolta from Saturday Night Fever and Pulp Fiction, the Carlton Banks dance from The Fresh Prince and a little bit of Jacko.

if you are interested in more details, take a look to the following articles:

And now, this is the video from The Black Keys YouTube official channel:

The video was nominated for a MTV Video Music Award 2012 for Best Rock Video, and Derrick Tuggle danced again on this promotional spot:

And finally this successful video has been covered in many ways, these are some examples on YouTube:


The vintage bass player in “Stand”

Derrick Tuggle had a role even into the music video of Stand by Lenny Kravitz: he is the “vintage” bassist of the band. There aren’t so much information about this video, anyway here it is:

And what about the future of Derrick T. Tuggle?

It’s a mystery, but the man has a profile on LinkedIn where he is appointed of the role of CEO at One Child Entertainment Group.