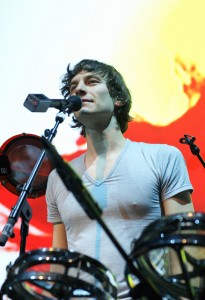 Gotye (pronounced like in Jean-Paul Gaultier) is a multi-instrumental, singer and composer Belgian-Australian, that defines himself a “music-making mutant”.

This year he has been known worldwide thanks to the single Somebody That I Used to Know, that has gained attention fast. The first time that I have heard this song it immediately seemed to me like something particular and pleasant, an impression confirmed by the following listenings.

It is unavoidable the comparison with Sting and Peter Gabriel that many do, but I think that he is not guilty for that, he simply has a voice that reminds both of them, while Gotye music is not copied.

Looking at his artistic path you can find a pleasant taste of composition freedom and autonomous choices, away from the usual market logics. And you have also the demonstration that nowadays if you are talented you can spread your music worldwide without being supported by an important circuit.

As an example of “Gotye mentality”, I want to cite an emblematic sentence that he has written into his biography contained into his website. He writes that after having had success in Australia Oz music industry parlance dictated that he should have been poised to “conquer the world”, but put in front of this prospective he affirms that “No, I think I’ll just continue to launch random and whimsical musical nuggets into the netosphere (read WWW) from the comfort of my secret studio lair, inside the belly of a dormant volcano, out back of Frankston shoppo (Frankston is a locality of Melbourne). ”

Despite he had reached an International success recently, he has already released 3 albums. Keep on reading if you want to know more about this capable and brilliant artist.

Gotye (pronounced like in Jean-Paul Gaultier) is the stage name of Wouter De Backer said “Wally“.

He was born in Bruges, Belgium, in 1980, and his family moved to Australia when he was two years old, where he actually lives.

He manifested his passion for music since his childhood learning how to play various instruments, piano and drums particularly. During his adolescence he formed together with some school mates the Downstares band, an experience lasted for all the high school period.

Talking about his musical forming path, Gotye cite an episode that he considers fundamental: he received from an elder neighborhood the LP vinyl collection the belonged to his wife recently died, thinking that he would have done a good use of it. It seems to me that this man was right …. 🙂

2001-2004 period – Boardface: in 2001 Wally recorded his first tracks using mainly samples, and put together a CD that contained four tracks, included the song “Out here in the cold“. He made about 50 copies, writing the track list manually and coloring the cover with pencils. It was in this occasion that he invented the stage name of Gotye, inspiring to a pet name used by his mother when he was a child. Than he made what everybody that had ever composed his own music has done once in his lifetime: he sent the CD to every radio station and record label that he could found on the telephone directory. He had a positive feedback from local press and from the joung radio station Triple J, that encouraged him to continue with other recordings based on samples.

In the same period he met the singer and composer Kris Schroeder and they started performing together under the name of The Basics. They formed a long lasting composing and performing partnership that became a constant presence on the live musical scene, providing to Wally a way to satisfy his passion for live exhibition. The Basics kept on performing and recording in parallel with Gotye, releasing 4 albums between 2004 and 2010.

Wally continued with the production of other two Gotye collections composed by 4 tracks that received positive recensions too, with several tracks that entered into Triple J rotation. The CDs were made with the same style of the first one. The interest into his job was growing, and he received the offer of an agreement for the distribution of an album, that should had been substantially a collection of the tracks of his first three releases. This album was published as Boardface at the end of 2003.

2006-2009 period – Like Drawing Blood: in 2004 Wally just to maintain himself found a job in a library in Melbourne while he continued to perform with The Basics and to register his Gotye tracks. In the following years he changed home several times, transferring each time his home recording studio in a new place with new acoustic characteristics. The acme of this period was the second Gotye album, Like Drawing Blood, name chosen as a reference to the difficulties faced in registering his own music in ambients always new. This album signed the beginning of his collaboration with the manager Danny Rogers, already manager of the Australian indie band The Temper Trap. The album Like Drawing Blood was transmitted by the station Triple J in May 2006 and was voted number 1 by the listeners like best album of 2006. Moreover the album was certified as platinum in Australia for having sold more than 70.000 copies. His first single, Learnalilgivinanlovin, was released in August 2006.

In the last months of this year and in 2007 Gotye and this album won various awards and acknowledgments in Australia, while in 2008 the album won the title of album of the year of iTunes in the United Kingdom.

2009 was the year of the first European success, when some singles were transmitted and entered into the hit parades in Belgium and The Netherlands.

Like Drawing Blood was officially released in the United States in 2012.

2010-2012 period – Making Mirrors and the international success: thanks to the success of Like Drawing Blood Wally was able to  settle down in a “permanent” home in Melbourne. In October 2010 he published the new single Eyes Wide Open on-line and in vinyl, that received once again positive recensions and acknowledgments.

But was in August 2011 that he released the album Making Mirrors preceded in July by the single that followed Eyes Wide Open titled Somebody That I Used to Know with the participation of the New Zealander musician Kimbra. The song was immediately successful in Australia, but was launched like a rocket when it received the endorsement of Ashton Kutcher and Lily Allen via Twitter, exposing Gotye music to their millions of followers. The single has sold more than 700.000 copies in Australia and more than 5.000.000 copies in the United States, entered in the first positions of the hit parades in Canada, France, Belgium, The Netherlands, Germany, United Kingdom, and into the iTunes classification in 46 countries.

Always in July 2011 was published a video of Somebody That I Used to Know on YouTube and Vimeo, that on September 2012 had been viewed more than 330 millions times.

In February 2012 Gotye published always on YouTube and Vimeo the clip of the song Easy Way Out, and had his television debut in the United States in the transmission Jimmy Kimmel Live. Since then there are uncountable covers of his songs performed in wide audience transmission in America like The Voice and American Idol, and all these exhibitions contributed to make this song reach the number 1 of the Billboard Hot 100. He was the first Australian artist to reach number 1 in the United States from Savage Garden in 2000.

His most successful singles

These are the official videos published on Gotye YouTube channel of the songs Somebody That I Used to Know and Easy Way Out, his most successful singles:

Somebody That I Used to Know has been executed by so many people and published on YouTube that Gotye himself has composed a video called Gotye – Somebodies: A YouTube Orchestra. See what people creativity can do:

Published for the first time in 2003.

Published for the first time in Australia in 2006 and worldwide in 2008.

Published for the first time in 2011.

Gotye on the Web

Gotye is present a lot on the Web. You can meet him on: